The Most Convenient and Top Quality Car Repair in London

Finding a mechanic you can trust in London can be difficult – there are so many options it can be overwhelming. We can help make your life way easier by sending our certified mobile mechanics to your home or office anywhere in Kelowna.

From battery changes to oil changes and brakes to engine repair in Kelowna, BC- you’d be surprised at all the work that we can do. Our technicians are all Red Seal Certified and insured to protect your car and property.

Call instaMek in London today and join over 20,000 Canadians who have experienced the magic of at-home car repair!

Our London Car Repair and Services 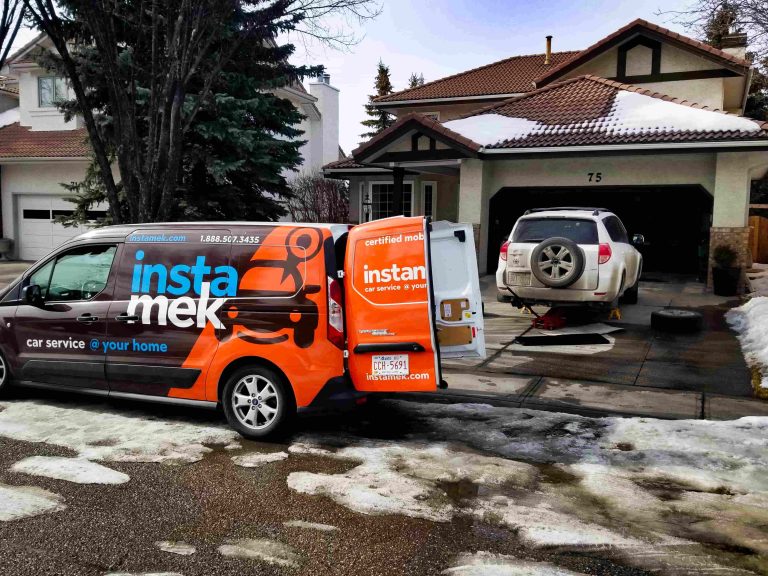 Auto Repair Services Near Me in London

Looking for a new mechanic can be quite stressful, finding the best mechanic for your vehicle and learning to trust that mechanic is no easy task. So many of our customers tell us that we are London’s most trusted mechanic. But talk is cheap, give us a chance to show you and we know you will agree that we are your new mechanic.

Is the brake fluid flush really necessary? The answer is yes. The hydraulic fluid amplifies the pressure generated by your foot on the pedal. Your brake fluid requires regular service to maintain Vehicle performance.

When you get a flat tire, turn on your emergency lights and slow down. Pullover as soon as you see an open stretch of road away from traffic. Call the Instamek Auto repair Mechanic in kelowna for Flat tire replacement service. You can trust our services and be assured that your car tires will be swapped on time and you would be back on the road in no time.

Your car’s transmission is crucial since it works with your engine. Your transmission needs regular maintenance and oil changes to keep it in optimal operating condition. It actually powers your wheels and tires, which is critical to the safe operation of your automobile as a whole. Schedule an appointment with Instamek kelowna now to maintain your gearbox operating at peak efficiency!

Sludge buildup is more likely if you don’t have your oil changed frequently, drive a lot of stop-and-go traffic, or have a car that isn’t used for months on end. Engine oil is designed to cycle through the engine to lubricate parts so they may continue functioning properly. An Engine flush cleans out debris and sludge from the engine.

A power steering flush, like many other fluid flushes, entails draining the old, tainted fluid and replacing it with fresh fluid. Every 30,000 miles, it’s recommended that you flush your power steering fluid. O-rings, seals, and other internal power steering components can wear over time, resulting in a fluid leak in vehicle. A leak of this nature might cause significant damage to the rest of the system, especially the pump. If your automobile’s power steering fluid is discolored or smells bad, flush it before it becomes an expensive problem.

Alignment services are made up of a variety of procedures, including adjusting the suspension (which ties the vehicle to the wheels). If you don’t get an alignment with tires, you might experience a harsh ride and uneven tire wear earlier than usual, reducing the life of your tires. A wheel alignment is a service that adjusts the angle of the tires to the manufacturer’s requirements, which affects how they contact the road.

The services included in car AC are the evacuation of all refrigerants, cleaning, and removal of trapped oil and moisture, an inspection of the complete HVAC system. Replacement of the AC compressor oil top-up and a comprehensive ac gas leak test is done.

Give us a call on +12508009203 and we’ll come and check your car’s battery at your home. In case the battery cannot be restored, we will replace it with a new battery. The price varies on the size of the battery – commonly the larger the engine, the larger and more expensive the battery.

We offer local and long-distance towing services at reasonable rates for all of our customers. We have an exquisite range of towing trucks that can meet your needs at all times. We can tow your car, van, light trucks, or whatever vehicle you are stranded with in the middle of nowhere. We also handle motorbike towing and accident or wreck recovery towing.

Our mechanic will perform the 147-point pre-purchase inspection at the seller’s location, taking photos and notes of the car’s condition. You do not need to be present. You will receive the mechanic’s report by email. Use photos and recommended repairs in the report to negotiate with the seller.

The serpentine belt/ Drive belt is a long, sturdy rubber belt that transports power to the engine accessories- the alternator, power steering pump, air conditioning compressor, and sometimes the water pump. You may notice performance issues with your vehicle because of a bad serpentine belt. The vehicle may frequently overheat. Bad Serpentine Belts Cause Vehicle Performance Issues.

If you hear ticking noise from the engine or if your car’s engine won’t turn over or if you notice an oil leak near the engine, It may mean the engine belt is failed. Switching a timing belt for preventive reasons usually costs $500 to $900. However, replacing a broken timing belt may cost up to $2,000 or more if it produced damage to the valves, pistons, or water pump.

A Tire Changeover requires at least one set of wheels and two sets of tires and involves keeping your existing wheels while only switching out the rubber tires. A Tire Changeover is ideal for those customers who are looking to change their tires without changing the look of their car. This service does include mounting and balancing of the tires as well.

Squeaks, whines, and hums are annoying, particularly when they emanate from your car. While recognizing automobile noises may appear to be straightforward, there might always be a more serious underlying problem. That is why our expert mechanics, who annually go through hundreds of hours of training, employ all of our equipment and technology to provide your vehicle with more accurate service.

When your car starts vibrating or shaking while you’re driving, it can be disconcerting and is a certain sign that there’s something wrong. This kind of shaking indicates a demand for anything from small repair work to something much more major.  Our mechanics are mobile, which means they don’t have the overhead that repair shops have. They provide you convenience by coming to your home or office.

The car radiator performs a critical function: it keeps the engine from overheating. The extra heat from the engine is removed and absorbed by the coolant flowing through the system. The coolant then goes through the radiator where it cools off and is later circulated back to the engine to absorb heat again. You should have your car’s coolant system and radiator inspected at least every 12 months. It’s a good idea to inspect the system every 12,000 miles, especially if you travel a great deal.

The Alternator operates while the vehicle is in motion, keeping the battery properly charged. Removing and inspecting the old alternator, as well as the alternator mounting bracket and fasteners. After that, your new alternator and alternator belt are installed, followed by alignment and tension checks. We then put it through its paces to ensure it.

Your vehicle’s fuel injectors require regular cleaning to keep them from clogging and causing engine failure. The buildup and debris in your car’s fuel system make it less efficient, resulting in increased maintenance costs. A fuel injector cleaning service flushes out all of the build-ups and cleans the injector. Your automobile’s engine will run more smoothly.

Your vehicle’s engine, which is called at the heart of your car, is an essential component in its maintenance. Our Engine Diagnostic & Performance Service includes spark plug replacement/inspection, an inspection of all engine components, ignition system, air, and fuel filter, and more. Our qualified staff of certified experts offers comprehensive services to ensure quality service.

The steering and suspension systems are important for both your safety and comfort when driving as they ensure a smooth ride as your car travels over bumpy roads. It must be inspected if Car has covered 50,000 miles or if you are involved in an accident where your front wheels or suspension are damaged or if you notice bumpy rides, oversteer, understeer, Hard Steering or Loose steering, vibration in the vehicle body, or unusual noise. Contact our expert mechanics for Steering and Suspension repair.

Few of us think about our brakes on a daily basis, but they are a critical component of a car and can mean the difference between life and death in an emergency. Proper maintenance and a quick response to warning signs will ensure that your car will stop every time you hit the brakes. Book an appointment with our mobile mechanics for brake repair service.

London is a city in southwestern Ontario, Canada, along Quebec City–Windsor corridor. According to the 2011 Canadian census, the city had a population of 423,844. London is located at the confluence of two rivers, the Thames River and the Lea River. It is approximately 200 km from Toronto and Detroit and 230 km from Buffalo, New York. The city of London politically separates from Middlesex County, but remains the county seat.

London has grown to become the largest southwestern Ontario municipality, and Canada’s 11th biggest metropolitan area. It has annexed many of the smaller towns that surround it.

London is a regional center of healthcare and education, and is home to the University of Western Ontario, Fanshawe College, and 3 major hospitals: Victoria Hospital, University Hospital, and St Joseph’s Health Centre. The city hosts a variety of musical and artistic events and festivals, which contribute significantly to its tourism industry, and its economy is largely driven by education, health care, insurance, and information technology. London has universities and hospitals among its top ten employers London lies at the intersection of highways 401 and 402, connecting it to Toronto, Windsor, and Sarnia. These highways also make it easier for people from Detroit, Windsor, Port Huron, Sarnia, and the U.S. to travel to Canada. The city also has international airports, train stations and bus stops.

Things to do in London, Ontario

2. Learn about the birth of insulin
3. Shop at Covent Garden Market
4. Stroll around Springbank Park
5. Meet Canada’s Medical Hero at Banting House
6. Live in the Past at Fanshawe Pioneer Village
7. Try Vegan Food at The Tea Lounge
8. Learn about Ontario’s History at Museum London
9. Experience Family Fun at Storybook Gardens

Are you social distance approved? What are you doing to protect people from Covid-19?

Yes! Since our mechanics come to you instead of you going to a shop it makes the first step of the process so much easier. On top of that our technicians wear the proper PPE and sanitize your vehicle after they’re done. We also ask you keep your distance and stay 6 feet or 2 m away from the technician at all times.

What kind of services can you do at peoples homes?

We can do over 500 services right at your home or office including oil changes, tire changes, brakes, inspections, alternator, starter, battery replacements and more. You’d be surprised at all the work we can do!

Yup all our technicians have at least 10 years of experience and are all Red Seal Certified Licensed Journeyman Automotive Technicians. We also have liability insurance for your car and your property!

What cities do operate in?

We operate in over 20 cities in Western Canada including Edmonton, Calgary, Vancouver, London, Kelowna, Surrey.

Is this more expensive than going to a regular shop?

Nope! Our prices are the same or lower than going to a shop especially if you sign for our instaMek Prime membership!